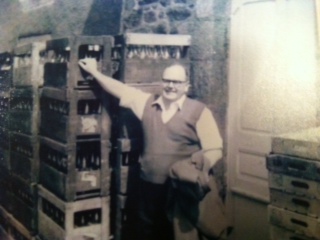 My wonderful granddad Edward, ‘Teddy’ Williams died today, aged 94. He was a wonderful man, and everyone who knew him would tell you that. He lived in Guernsey all his life – apart from when went away to fight in World war II – and he loved that island so much he even wrote a poem about it (which was published).
My dad is a vicar, and he’ll be taking my granddad’s funeral service next week. We’re not expecting a dry eye in the house. My wife and I both agree that our troopers (10, 8 and 5) are too young to go to the funeral, but we are going to have to tell them that granddad has gone to heaven. And we’re expecting a pretty good reception.
The troopers have been building up quite a dossier about heaven over the last few years. It actually began when my sons learned that a young boy in their school had died, and a teacher had pointed out that they weren’t to worry as normally, little children don’t die but adults. So the troopers were upset – and curious – was I going to die? Was their mum? Why did people die? Where did they go?
I told them that yes, me and their mum would die before them but years and years and years from now. I also added that it had to happen that way because we needed to get to heaven first and prepare the party for when they arrived. This cheered everyone’s spirits to no end, and my wife and I heartily congratulated ourselves on our ingenuity. Then the party related interrogations began.
“Who can we invite to the party?” “Do they have to be dead too?” “Can we have party rings?” “Do we get presents?”
As for the last question, we didn’t want to be seen to be penny pinching on the celestial party of their lifetime so we said that yes, in heaven there’ll be presents galore. In heaven you can have whatever you want. Forever. That captured their imaginations like only endless possibility can.
Obviously we made the point that you need to be good to get into heaven. But the troopers reckon a life of goodness for an everlasting one is definitely worth it. My son Sam said “Dad, I’m even going to be good after I’ve got in!”
So in our house, going to heaven is almost the equivalent of winning the lottery.
And if that wasn’t good enough, we told them that when they have had enough of being in heaven, they can come back down to earth as someone else. “Dad, who’d get sick of having whatever they want?” was my son Jude’s sage response.
So granddad, if you’re reading this, you’ve got three great grandchildren here who want to know what you’ve ordered in for the party.
Until we meet again granddad.