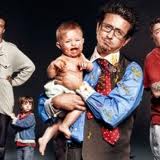 What do men need to prepare them for and support them in fatherhood? Maybe books written specifically for dads (I can think of a brilliant book for new dads)? NCT classes for new dads like Hit the Ground Crawling? The support of their own family? To spend time with other new dads? Or perhaps a week long crash course in childcare at a local nursery?
I’m sorry… hold it there. A week long crash course in childcare at a local nursery? Who would think that would help them to be better dads?
Channel 4, that’s who. Daddy Daycare is their new programme, and the first in a 3-part series was broadcast last night. It took three dads that aren’t used to being in a childcare environment, put them in a really busy nursery and watched them struggle, while a not entirely supportive staff of single mums look on.
Apparently, however, its purpose is not to portray men as incompetent and feckless dads. Perish the thought! No, this limited, made for TV experiment is to “Help our nation’s mums and kids to rediscover what it means to have men in their lives.”
Excuse me?
Yes, you read that right. Apparently, modern British life has spawned a generation of dysfunctional dads that are being pushed away from their families. The voiceover tells us that the idea behind the show is to take nine “Lazy, disinterested, workaholic and absent fathers for a crash course in childcare to make them better fathers.” I really am quoting here.
Putting new dads (or men thinking about fatherhood like Stefan) in to that environment will not make them better dads, any more than a learner driver would be entrusted with an Express train full of passengers to make them more able to drive a car. For a start, it takes training, it takes time and it takes experience to master new skills. So in this scenario, if these dads had the benefit of all those things, they would become great childcarers. But being a good dad isn’t just about taking care of physical needs. It’s about stepping up and being a parent. I recently read a comment from a dad who was asked if he was ‘babysitting’ his own daughters. “No,” he said “I’m parenting them.” There is a difference and it’s not made clear in the show (and if it really is aiming to help the nation, I think that distinction needs to be a matter of public record).
But the real problem I had with the show was that it was such a wasted opportunity. I know a lot of new dads that tuned in last night to watch, expecting something ultimately educational and positive. No, unfortunately it stuck to the old stereotypes: men are idiots when it comes to parenting. Which is an unfortunate message to be broadcasting at a time when there are so many more stay at home dads than there used to be, and the number is on the rise.
I don’t think the women fared much better in the stereotypes either. We are told that 98% of the childcare workforce is women, and that women are more patient and understanding. Yet, we were shown no evidence of patience and understanding for “The Men” who were so obviously out of their depth. And are we really to believe that all single mums are eye-rolling, arm crossing, judgemental individuals who think that men are completely inept as dads, “have no instinct whatsoever” and think that “it’s a women’s world?” Apparently we are, yes. Another wasted opportunity: these women are extremely hardworking, professional childcarers that are also managing a household alone. They deserve medals not tired stereotypes.
There was one exception, when Garry went home with Vivien, one of the nursery staff. Vivien has a punishing schedule: she gets up at 4.30am, has 3 hours of commuting, a full time job and is single parent to two young children. She told Garry that this schedule makes her feel like a robot, and that if she had an entire day to herself, she would sleep. They were both alike in that they both want a better future for their kids, but Vivien is not in the position of having the choice to cut down her workload to spend more time with her family. I found the two minute interaction between Vivien and Garry by far the most insightful part of the show. I think Garry did too.
If there are any inexperienced dads reading this, I’ve been a stay-at-home dad for 10 years and I’m telling you that you don’t need to go to the local nursery for a crash course in childcare to be a better dad. You need to get to grips with the skills you need with your own children. Don’t believe that as men we’re not biologically programmed to parent. It doesn’t take biology to become a whizz at changing nappies, understanding cries and all the other baby admin, it takes practical experience. And when you have the admin sorted, you get time to really engage with your kids. It may not seem like it now, but you have a really short amount of time with them (just 2000 days between birth and age 5 when they start school). Start making that time count today.